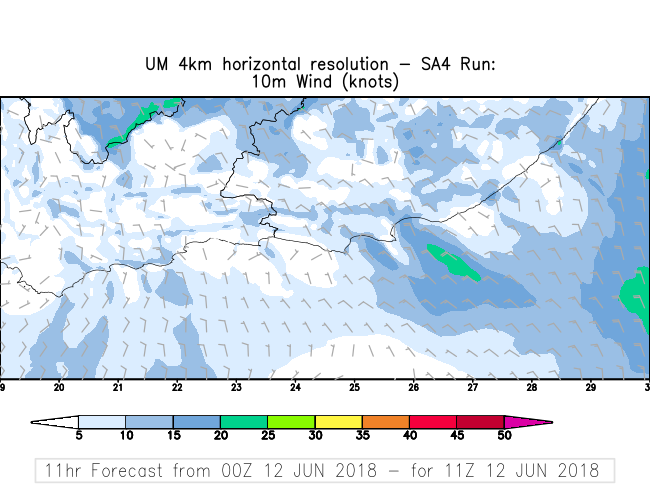 The system provides state-of-the-art forecasts for key ocean wave parameters, such as significant wave height, period and direction, free of charge to the South African public.

The system has been designed with a multitude of users in mind; from surfers and paddlers to small scale fishermen; from the coastal tourism industry to the offshore industrial community.

This exciting development is the culmination of extensive behind-the-scenes research and development by the scientists of the South African Weather Services Marine Unit. The main aim of the project was to design and implement a wave forecasting system which was fit for purpose for South Africa’s unique oceanographic context, in order to benefit the ocean economy. To do this, it focused on addressing key shortcomings of the global models on which users have relied up until now.

Marc de Vos, a researcher in the Marine Unit said: “Global models are adequate for painting a general picture of the open ocean swell. However, inherent technical limitations mean that they cannot accurately describe the wave conditions nearer the coastline, where the vast majority of wave-dependent activity takes place. This is why we have radically raised our models’ resolution, as well as the quality of the data which we use to drive them – so that we can actually paint a true picture of the way waves are moving around our coastline in high detail. The model itself is also well-suited to both open ocean and near-shore waves. Along with these benefits comes enhanced reliability, and so we hope that we facilitates better and more decision support to the range of users. The fact that this system has been built and will be run in-house means that allows us to be highly flexible and responsive in terms of responding to user needs and requests, and to maintain a sharp focus on the needs of the South African user community.”

The system consists of a regional Simulating Waves Nearshore (SWAN) model with a horizontal resolution of around 6 km. In key areas around the coastline, additional models are run with resolutions of around 2 km. For expert and commercial users, resolutions from 250 m down to 10 m are available for areas for use in guiding operations which are critically dependent on waves conditions. The system is driven by wind input from the South African Weather Service’s high resolution Unified Model, and receives boundary conditions from our partners at NOAA’s NCEP.

The model will be run on the South African Weather Service’s proven high performance computing platform in Pretoria, meaning the system is likely to be highly dependable.